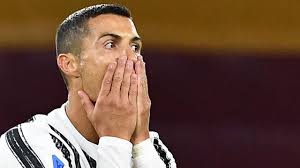 October 14 – Cristiano Ronaldo has become the latest player to test positive for the coronavirus. The Portuguese Football Federation issued a statement on Tuesday, saying that Ronaldo is “well, without symptoms, and in isolation.”

The Portugal star and one of the most recognisable faces in world sport played for Portugal against France in the Nations League on Sunday and against Spain in a friendly last week, but his positive test has ruled him out of the European champions’ National League match against Sweden on Wednesday. On Tuesday morning, he tested positive again.

On Monday, Ronaldo had posted a photo to social media of him sharing a meal with his Portugal teammates. The caption read: “United on and off the field.”

Ronaldo will also not feature in Juventus’ upcoming matches against Crotone in the Serie A and Dynamo Kyiv in the Champions League. In the first wave of the coronavirus, Juventus were plagued by the virus with Paulo Dybala, Daniele Rugani and Blaise Matuidi all testing positive, but at the time Ronaldo was spared.

His positive test will no doubt infuriate Juventus, which, like other clubs, had feared that players on international duty might get infected and return unable to play due to quarantine measures.