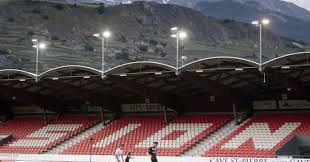 October 22 – Top-flight Swiss side FC Sion have put their entire squad and medical staff into quarantine and have asked for their next two games to be postponed following the club’s latest coronavirus tests, though results were not revealed.

The news coincided with Sion being ordered to play behind closed doors and FC Basel, Switzerland’s best supported club, being told they can only have 1,000 fans at home matches as local authorities slashed crowd sizes amid a surge in COVID-19 cases.

Basel’s next match, at home to Lausanne on Sunday, has already been called off after one player tested positive following a training session, their second successive postponement.

Although the federal government last month said that professional football and ice hockey clubs could have stadiums up to two-thirds full, the final decision lies with local authorities.

“It is a stab in the heart for all football and sports fans, it hits us very hard,” he said in a club statement.

“(It is) a great pity in view of the enormous efforts that were necessary to create the current protection concept. The protection concept in St. Jakob-Park was implemented in an exemplary manner by the fans in the match against FC Luzern and worked very well.”

He said that the lack of matchday revenue would create an “existential” challenge for the 20-times Swiss champions.