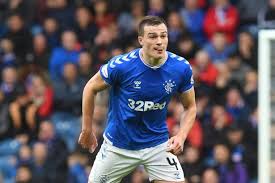 A statement from the Scottish top-flight leaders said winger Jordan Jones and defender George Edmundson (pictured) attended a private gathering on Sunday “with others outside their household”. Fixed Penalty notices were issued by Police Scotland after the two attended a house party in breach of the current Covid restrictions.

The pair will now be investigated by the club and must isolate for 14 days.

“We are completely aligned in our action and the standards that are being set at Rangers,”  managing director Stewart Robertson said.

“We will not tolerate behaviour that does not follow those standards and it is totally unacceptable for any of our players to be involved in anything that puts at risk the excellent protocols that have been put in place at Rangers.”

Rangers went nine points clear of perennial SPL winners Celtic at the weekend after a 1-0 win over Kilmarnock. Celtic, who have two games in hand over the league leaders, won their Scottish League Cup semi-final against Aberdeen and now face Hearts in the final to complete what is last season’s competition. Celtic have won the competition 39 times.