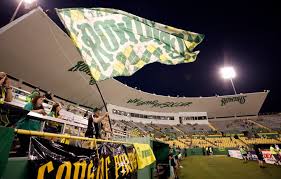 November 2 – The second tier United Soccer League was forced to call off its 2020 Championship Final at the weekend following multiple positive covid tests amongst Tampa Bay Rowdies players and staff.

The USL said that the final will not be rearranged and that its conclusion was last week when the conference title matches were concluded.

Tampa had been scheduled to play Phoenix Rising in the final, each having progressed as respective winners of the Eastern and Western Conferences.

The option of playing in three to four weeks was considered, but ruled out with both teams having players called up to international duty and some player contracts expiring at the end of November.

A league statement said: “USL HQ, the Tampa Bay Rowdies and Phoenix Rising FC will explore the possibility of a 2021 Season Kickoff game between the two clubs prior to the start of the 2021 Championship season.”

USL President Jake Edwards said: “First and foremost, we want to applaud these two teams on an incredible season. They deserved the opportunity to play for the USL Championship Final trophy and we are disappointed that we won’t be able to watch them on Sunday night. With that said, we want to thank all of our clubs, our supporters, our players and our staff for all of their time, hard work and energy this season. We’ve grown closer under difficult circumstances and we can’t wait to be back together again soon.”