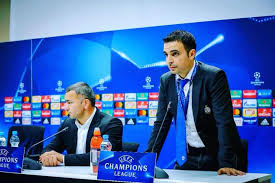 November 4 – UEFA has moved swiftly to provisionally ban Qarabağ FK communications officer Nurlan Ibrahimov after comments made on social media calling for the killing of all Armenians.

Ibrahimov (pictured right) posted: “We [Azerbaijanis] must kill all Armenians – children, women and the elderly. We need to kill them without making a distinction. No regrets. No compassion.”

He then went on to justify the Armenian genocide committed by Turkey in 1915 and 1916. While the posts were later deleted it was not before the Armenian Football Federation has been alerted and filed a complaint to UEFA.

In a statement issued this morning, UEFA said: “Nurlan Ibrahimov, is provisionally banned from exercising any football-related activity with immediate effect until the UEFA Control, Ethics and Disciplinary Body decides on the merits of the case.”

Ibrahimov is charged with facist and other discriminatory conduct (Art. 14(1) of UEFA Disciplinary Regulations), and violating the basic rules of decent conduct – Art. 11(2)(b).

Qarabağ are from the disputed region of Nagorno-Karabakh which is the scene of intensive military conflict currently between Azerbaijan and Armenia. The club, founded in 1987 and a founder member of the Azerbaijan Premier League in 1992, have not played in their home town of Agdam since 1993 due to the dispute.

Qarabag are currently at the bottom of their Europa League group without a point. They play away to Turkey’s Sivasspor on Thursday.