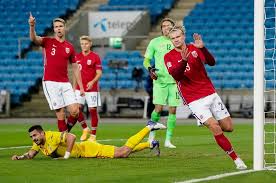 November 12 – Last night’s international friendly between Norway and Israel was the latest fixture to fall victim to Covid-19 with the game called off because of concerns about infection among the visiting team.

Norway’s Directorate of Public Health, which originally gave the go-ahead for the friendly, changed its mind just hours before kick-off amid suggestions that Israeli players spent time with teammates before being brought under isolation.

A statement from the Israeli FA stated: “The match between the Norwegian and Israeli teams that was scheduled to take place tonight was cancelled in accordance with the decisions of the authorities in Norway.”

Norwegian FA chief Pal Bjerketvedt added: “It is of course sad to cancel a match hours before kick-off. At the same time, it underlines the seriousness of the situation we are in.

“Over 500 international matches in Europe have been held this autumn. Therefore, we are confident that the protocols provide the necessary infection control framework around the matches that are played.

“Now that the health authorities are unsure of the risk of spreading after an outbreak of infection in the Israeli squad and recommend canceling the match, we will of course follow this.”