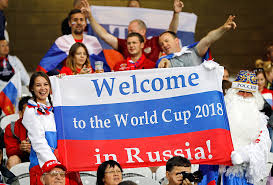 December 18 – Russia’s participation in the 2022 World Cup has been plunged into jeopardy after a landmark ruling by the Court of Arbitration for Sport (CAS) banning the country from using its name, flag and anthem at the next two Olympics or any world championships for the next two years.

CAS halved the four-year ban proposed last year by the World Anti-Doping Agency after Russia was accused of state-sponsored doping but appeared to seriously question Russia’s participation in Qatar even though they will be able to play in the delayed 2020 European Championships next summer since UEFA is not considered a ‘major event organisation’ in relation to breaches of anti-doping regulations.

Russia are in Group H of World Cup qualifying alongside Croatia, Slovakia, Slovenia, Cyprus and Malta and a FIFA spokesman said only that the organisation “took note of the CAS decision and will now assess its consequences.”

On paper the ruling doesn’t augur well for Russia though the CAS verdict says athletes can take part in sporting events if they are not banned for or suspected of doping.

Even if Russia somehow does manage to take part in Qatar it won’t be allowed to do so under the country’s flag, with the ban expiring on 16 December 2022 – two days before the end of the first ever winter World Cup.

The Russian national anthem cannot be played or sung either, meaning that if they qualify Russia will have to compete under a neutral name though everyone will still know who they are, given they can retain their national flag colours of red, white and blue. If they did make it through to the 3rd place play-off or final these restrictions will have expired.

“The panel has imposed consequences to reflect the nature and seriousness of the non-compliance and to ensure that the integrity of sport against the scourge of doping is maintained,” said CAS.

“It has considered matters of proportionality and, in particular, the need to effect cultural change and encourage the next generation of Russian athletes to participate in clean international sport.”

After the ruling was announced, Wada said it was pleased to have “won this landmark case”, adding it was important for “clean sport across the world”.

“We left no stone unturned in investigating this very complex matter and in presenting our case before Cas,” said Wada president Witold Banka.