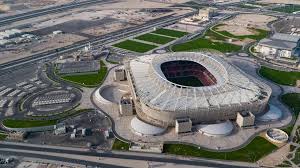 December 18 – Al Sadd and Al Arabi will meet tonight in the final of the Amir Cup to inaugurate the Al Rayyan Stadium, one of eight venues for the 2022 World Cup in Qatar.

The 40,000-capacity venue will host seven World Cup matches, including a round of 16 match. The Qatari cup final will mark the inauguration of the stadium, the latest World Cup venue to be opened with two years to go until the tournament, and serve as a first test event for the ground. Al Rayyan Sports Club will take up residence at the stadium.

The global health crisis has prevented testing the stadium to capacity for the domestic cup final, but 50% of the stadium’s capacity will be filled with fans under strict health protocols. All attending fans have been asked to carry out a Covid-19 test and will have to present a negative result or a positive antibody result to be allowed into the ground. Food and beverage concessions in the stadium will be closed.

Al Sadd, record winners of the Qatari cup, will be favourites going into the match against the team of coach Heimir Hallgrimson. “For many years, they (Al Arabi) have not won a title and they will have that extra motivation to do well in the final,” said Al Sadd coach Xavi at a news conference. “So if anyone thinks that Al Sadd will win the title easily, they don’t understand football. They’ll be ready to find and put all hurdles in our path.”

The Al Rayyan Stadium is the fourth World Cup venue to be completedd, underwriting that Qatar’s preparations for the global finals are well progressed. “Our World Cup preparations remain on track, with 90% of infrastructure projects completed,” said the secretary general of the local organizing committee Hassan Al Thawadi previously in a statement. “We look forward to unveiling more stadiums next year.”

Last year the Amir Cup final also served as a marquee moment for Qatari organizers when the match inaugurated the 40,000-capacity Al Wakrah Stadium. In December, Qatar hosted the FIFA Club World Cup, but at the last minute plans for the Education City Stadium to become the centerpiece venue of the competition had to be ditched. The stadium has however opened in the meantime. The Khalifa International Stadium was completed previously.

Al Bayt and Al Thumama are close to completion as well, according to the local organisers. In February, Qatar will host the 2020 edition of the FIFA Club World Cup.

The venue in Al Rayyan has a modular structure. The capacity will be reduced after the global finals as parts of the stadium will be repurposed in Qatar and overseas.