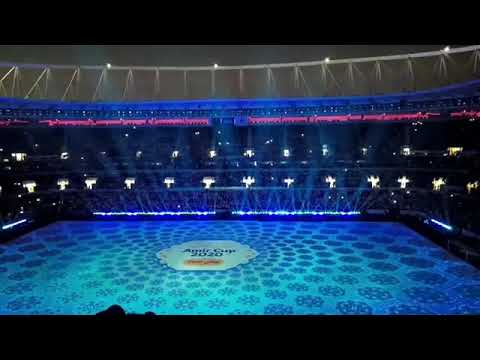 On Qatar National Day, the Qatari cup final was played exactly two years before the final of the World Cup and marked the opening of the Al Rayyan Stadium.

A brace from Baghad Bounedjah before half-time was enough for Al Sadd to win, with Aron Gunnarson scoring for the team of Icelandic coach Heimir Hallgrimson in the 23rd minute.

The game at the 40,000 capacity stadium was played in front of almost 20,000 socially distanced fans, who had to present a negative covid-19 test to be allowed entry into the ground. Food and beverage concessions were closed inside the stadium.

Sheikh Tamim bin Hamad Al Thani, the Emir of Qatar, and Gianni Infantino, the FIFA president, were also in attendance. The FIFA supremo had jetted in after handing Robert Lewandowski The Best trophy on Thursday. Last year, during the Club World Cup, Infantino also attended the military parade on the corniche for Qatar National Day.

AFC President, Sheikh Salman bin Ibrahim Al Khalifa, UEFA president Aleksander Čeferin and Conmebol president Alejandro Dominguez were also present for the inauguration of the stadium. They were treated to a ceremony featuring music, cultural performances and visual effects before Al Sadd prevailed in the final.

“It was also another opportunity to test our readiness for Qatar 2022, with thousands of fans enjoying the spectacle, despite the challenges caused by the ongoing pandemic,” commented Nasser Al Khater in a statement.

In 2022, the Al Rayyan stadium will host seven World Cup matches, including a round of 16 match. It is the fourth World Cup venue to be completed after the Khalifa International Stadium, the Education City Stadium and the Al-Janoub Stadium. The venue in Al Rayyan has a modular structure and the capacity will be reduced after the global finals as parts of the stadium will be repurposed in Qatar and overseas.