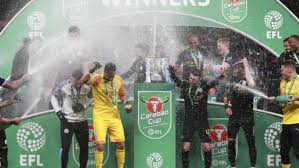 December 22 – The EFL has pushed its League Cup final back from February to April in the hope that more fans will be able to attend its Wembley showpiece event in London.

The final traditionally take place in February, offering clubs a chance at silverware as well as a ticket to the Europa League, but this weekend the UK government announced tough fourth tiers coronavirus restrictions for the English capital and south-east England with fans no longer able to attend football matches.

“It is the objective of the League to stage the final with as many supporters in attendance as possible and the decision has therefore been taken to move the final from its original date of Sunday 28 February 2021 to later in the year,” said the EFL in a statement.

“The number of fans permitted will be dependent on government guidance in place at the time and it is hoped that moving the date to later in the year will give clubs and their fans the best opportunity to attend in person.”