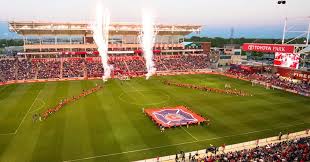 January 28 – Chicago’s second professional men’s team, who will begin play in the third tier NISA for the upcoming 2021-22 season, will base themselves at the SeatGeek Stadium in Bridgeview, Illinois.

The 20,000-seat SeatGeek Stadium opened in 2006 was the home of Major League Soccer’s Chicago Fire until 2019. The Chicago Red Stars (National Women’s Soccer League) have played their home game there since 2009.

Chicago NISA President/CEO Peter Wilt and Village of Bridgeview Mayor Steven Landek announced they have signed a Memorandum of Understanding on a multi-year agreement.

Scheduled for a late summerd kick-off and playing a European calendar through to Spring 2021 (as opposed to a calendar year as per other US leagues), the National Independent Soccer Association (NISA) is expecting a 13-team line for its second season.

The commercial model for clubs in the league is based around independent clubs controlling their own league and intellectual property, as well as  the barrier of territorial rights. NISA also runs a mid-summer pro-am Independent Cup tournament, as well as the year-long amateur league NISA Nation.

The new Chicago team is looking to build a sustainable and community driven business model. “SeatGeek Stadium is a venue we can grow into,” Wilt said. “We don’t expect to fill the 20,000 seats every game initially, but we don’t expect to remain a third division club for long either. NISA offers us the hope, and indeed expectation, to climb the American professional soccer ladder via the meritocracy offered by promotion and relegation.”

NISA has ambition to build a recognised second tier professional division that would rival the USL Championship as well as eventually take the MLS head-on. Whether the US can sustain two equally ranked top flight remains to be seen, as does whether the league could the US Soccer Federation’s approval to be classified alo0ngside the MLS. Similarly there would be questions as to whether the regional governing body, Concacaf, would recognise NISA and give its clubs qualification slots for its regional competitions.