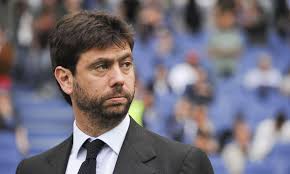 Radical proposals by Europe’s biggest clubs for a 20-strong breakaway league including15 permanent founder members were widely reported earlier this week, but Agnelli has described UEFA’s plans to use the so-called ‘Swiss system’ in the Champions League – with four more group matches per club – as “great” and said there had to be open access to European competition based on sporting merit for all “to keep the dream alive”.

Agnelli, whose club was one of those reportedly part of the super league project,  is backing an open qualifying system that would place all 32 teams into a single league table rather than the current eight groups. Each team would then play eight to 14 games, with opponents determined based on ranking positions. The format would also allow for the competition to be expanded to 36 teams.

“The so-called Swiss system is a very interesting system and the credit for this idea has to be given to one of our members of the ECA, Ajax, for pointing this out a couple of years ago as a potential system,” Agnelli said during a News Tank Football virtual event this week.

He made it clear he wants any new system to be based on recent results rather than history and size of club.

“Increase the stability and participation, keep access from the domestic level, competitions at the European level should be open to all.”

“We as the managers of the industry, we must keep the dream alive, which is one of the mantras of our history, everything should be based on sporting matters, of sporting merit, but we should remember where the fans of the future are going, so there is a strong view that more European matches are welcome.

“It is not just about England, France, Germany, Italy and Spain, but we must embrace also the lower competitions, guarantee an adequate European representation but at the same time offer stability of participation. Stay ahead of new competitors in the changing media environment and respect and nurture the interests of domestic championships.”

“What I can tell you with certainty is from the ECA’s perspective … I will want any and all reforms to go through the general assembly of the ECA with all clubs voting for whatever our collective future will be.”