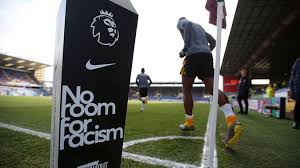 February 8 – The four Premier League clubs from Manchester and Liverpool have joined forces to condemn the online racial abuse suffered by players in recent weeks.

The statement was issued before United hosted Everton on Saturday and City met Liverpool the following day on Sunday, the four clubs coming together with the mayors of Greater Manchester and the Liverpool City Region in a show of solidarity.

“We condemn the racist abuse that too many players, officials and supporters continue to encounter, most recently on social media platforms,” they said.

“We stand shoulder to shoulder in saying there is no room for racism, hate or any form of discrimination in our beautiful game. It should not happen and it must stop,” the clubs and mayors said in their statement.

Social media companies have reiterated their commitment to eradicating online hate but England’s Professional Footballers’ Association (PFA) says those who send abusive messages should be held accountable by authorities and have their social media accounts banned.

And the Mayor of Greater Manchester Andy Burnham called on the companies to hold themselves accountable if and when racist abuse is reported on their platforms.

“I want to see social media companies step up, I think they are lagging behind. It’s 20 since laws were changed at football grounds, space was taken away from racists. If people made racist comments firm action could be taken,” he said.

“Social media companies are dragging their feet and saying it is also too difficult. They should be held accountable, they need, in my view, people’s identity details to be attached to accounts.”

FIFPro, the world players’ union, added their voice to the campaign today by calling on platforms such as Twitter, Facebook and Instagram to clean up their act and stop “a stream of abhorrent discrimination.”

“Until now, these platforms have largely failed to address abusive behaviour in a strong and unequivocal manner,” said FIFpro. “Footballers continue to be victims of an elevated amount of abhorrent racist and discriminatory abuse even as they drive public engagement on social media platforms, and help bring attention to important social issues. “

FIFPro General Secretary Jonas Baer-Hoffmann added: “Football players who have publicly and eloquently denounced online abuse have helped to highlight the serious and repetitive nature of these attacks. All of these players will receive our continuous support to call out the lack of care and adequate protection provided by social media companies.

“We now urgently need both national and international authorities to step in and collaborate to make these companies clean up their platforms and remove the stream of abhorrent discrimination that continues to contaminate both public channels and personal lives on every continent.

“FIFPRO and our fellow player unions will continue to actively provide evidence to public institutions on this issue on behalf of our members. At the same time, we are willing to provide any support necessary to assist social media companies in order to make their platforms a safe environment for both players and the general public.”