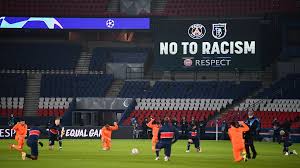 February 12 – UEFA has opened disciplinary proceedings against two Romanian officials at the centre of racism allegations in a Champions League match last December.

After being shown a red card for protesting a refereeing decision, Webo could be heard over the broadcast of French channel RMC Sport repeatedly asking: “Why [did] you say the black one?” and pointing at Colţescu.

Twenty-four hours later, the match resumed with players taking knee and wearing ‘No to racism’ t-shirts. PSG ended up winning 5-1.

An investigation has now been opened against Coltescu and assistant referee Octavian Sovre for potentially breaching Article 11 of the UEFA rules which state  that member associations, clubs and players must “comply with the principles of ethical conduct, loyalty, integrity and sportsmanship”.

While there was no actual mention of racism, which comes under a different statute, reports suggest UEFA could still decide that further regulations were broken.

The case is now in the hands of UEFA’s Control, Ethics and Disciplinary Body following a report from an inspector appointed by UEFA  “to conduct a disciplinary investigation regarding the incident and the events that led” to the game at the Parc des Princes being abandoned.