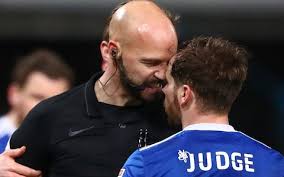 February 17 – Players squaring up angrily and just stopping short of a headbutt is nothing new in football but it rarely centres on the referee.

Hence the sense of surprise at what happened in an English League One game on Tuesday night involving referee Darren Drysdale which is expected to prompt an official investigation.

Drysdale, took charge of Ipswich Town’s home tie with Northampton, appeared to lock  heads with Ipswich midfielder Alan Judge in an extraordinary exchange after the player went down in the box and appealed for a penalty.

As Judge approached the referee to make his case for a spot-kick, Drysdale stood his ground and even appeared to move his head towards Judge’s. Both sets of players even had to get involved and restrain Drysdale, who then brandished a yellow card to Judge for simulation.

Former Premier League referee Mark Halsey insisted that “no referee should put themselves in that position” and anticipates an investigation from the Professional Game Match Officials Board, the official body that runs referees in the English game.

“Darren Drysdale showed a lack of self-control when he squared up to Ipswich’s Alan Judge,” Halsey told The Sun newspaper.