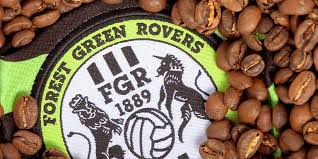 February 24 – Forest Green Rovers, the English fourth-tier club that is powered by renewable energy, serves vegan food to players, staff and fans and prides itself on being the “greenest” club in the world,  have launched a new team shirt partly made of coffee waste.

The shirts, which the club says are a football first, will be worn by players when they face Colchester on Saturday and will be available next season.

“It’s just about not using a virgin material,” he told the BBC. “The shirts are a combination of coffee grounds and recyclable plastic bottles, which is a special process, so everything in them is recycled or organic.

“We think it’s lighter than the bamboo, and apparently it breathes better, which is a surprise to me, but there is a performance benefit from minimising plastic because you sweat more and get hotter. But you need that blend because the shirts also need to be super tough.”

“It’s time the world of football wakes up and smells the coffee about the future of the planet. If nothing else, this prototype kit will bring new flavour to that old cliche of grinding out a result.”