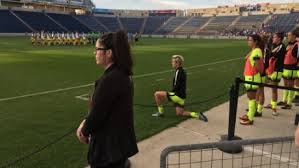 March 1 – The United States Soccer Federation has voted to end a ban on players protesting racial inequality and police brutality from kneeling during the national anthem.

The federation repealed a controversial policy that required players to stand during the anthem, with 71% of its national council voting in favour.

It was initially repealed in June last year by the federations’ board of directors but had to be approved by the national council in order for it to be official.

The previous ruling stated that “all persons representing a Federation national team shall stand respectfully during the playing of national anthems at any event in which the Federation is represented.”

It was put in place in 2017 after women’s star Megan Rapinoe took a knee the previous year before a friendly in solidarity with former quarterback Colin Kaepernick’s protest that turned into a global movement throughout world sport.

“We know that this is a very divisive issue within our country and throughout the world,” U.S. Soccer President Cindy Parlow Cone told reporters. “So I was not surprised that our membership was not 100% one way or the other.”

U.S. Soccer later put out a statement to denounce comments made by one of its delegates Seth Jahn who wanted the ban retained, downplaying the impact of slavery and dismissing police brutality against African Americans.

“The offensive comments made from the floor by a delegate during today’s annual general meeting do not represent the views of U.S. Soccer,” the statement read while Parlow Cone told the floor: “This is not about disrespecting the flag or about disrespecting the military.  This is about the athletes and our staff’s right to peacefully protest racial inequalities and police brutality.”

“As we reflect on a successful AGM, we also want to underline the importance of U.S. Soccer’s focus on diversity, equity and inclusion efforts within the federation and across our membership.”

Jahn, who played for the US seven-a-side Paralympic team and was a member of USSF’s athletes’ council, was removed by his peers on the council for breaking its Prohibited Conduct Policy on harassment, “including any verbal act in which race is used or implied in a manner which would make a reasonable person uncomfortable.”

A statement said: “The athlete’s council does not tolerate this type of language and finds it incompatible with membership on the council. While the council understands that each person has a right to his or her own opinion, there are certain opinions that go beyond the realm of what is appropriate or acceptable.”