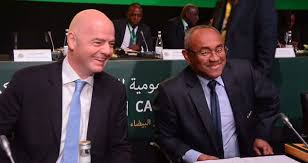 March 2 – Almost unnoticed amidst the ongoing shenanigans surrounding the four candidates vying to take over from him, the appeal of African football chief Ahmad Ahmad against his five-year FIFA ban was due to take place today.

Whilst few expect the Court of Arbitration for Sport (CAS) to overturn the ban in order to allow Ahmad – technically at least – to take part in the March 12  election for the presidency of the Confederation of African Football (CAF), stranger things have happened and a second day has been allocated for the hearing in case it cannot be completed in one.

Last month, in a rare and unexpected move, CAS dramatically reinstated Ahmad as head of his confederation pending a full appeal against his sanction which was handed down in November after FIFA adjudged him to have breached several of its ethics codes.

Interestingly, despite being returned to his position as both CAF president and FIFA vice-president, Ahmad (pictured with an old friend in happier times) has not yet been passed eligible to run which adds even more intrigue to his case.

According to the BBC, a reduced sentence is considered a likely outcome. But were the ban to be crushed completely, voting allegiances could suddenly be switched at the last minute in favour of Ahmad who has not even completed one full term.

Much would depend on how much support Ahmad, who claimed he had the backing of 46 federations before being initially ruled out of the election,  would be able to wrest away from the three Francophone candidates – Jacques Anouma (Ivory Coast), Augustin Senghor (Senegal) and Ahmed Yahya (Mauritania) who are all going up against Patrice Motsepe (South Africa), the contender widely reported to be the personal preference of FIFA boss Gianni Infantino.