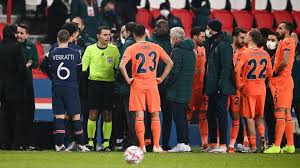 March 9 – UEFA have suspended Romanian fourth official Sebastian Coltescu until the end of the season for his role in a racism case last December.

The match  resumed the following day but only after all four Romanian officials were replaced.

Webo said Coltescu had disrespected him by referring to him as “the Black one” and an investigation was launched.

UEFA said in a statement that Coltescu had been suspended for “inappropriate behaviour during a UEFA match for which he was appointed” and had been ordered to “attend an educational programme before 30 June 2021” though there was no mention of racism per se.

The ban will apply to domestic games in Romania because Coltescu is no longer on the FIFA-managed list of officials approved for international games.

“In the international context, correct use of language is essential to avoid situations such as those that occurred in the above-mentioned match,” UEFA said.

Assistant referee Octavian Sovre was also reprimanded for his role and ordered to attend an educational programme before June 30.