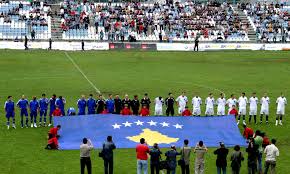 March 10 – A huge political row is brewing after Kosovo threatened to boycott their World Cup qualifier against Spain later this month if they are not allowed to display their flag or play their national anthem before kick-off.

Spain are one of only five European Union countries who do not recognise Kosovo as an independent state, along with Slovakia, Greece, Cyprus and Romania.

Spanish newspaper Marca said Spain’s position means restrictions will be placed on the visitors before the game, due to be held at Seville’s La Cartuja stadium on March 31.

The Balkan federation said it would insist on playing its anthem and displaying its flag, declaring “otherwise, the game will not take place”.

It said Spain calling Kosovo a territory was a “provocation” and “unacceptable”, adding it was “an independent state, recognised by the majority of developed and democratic countries around the world”.

It also said it had written to the Spanish federation and would take the matter up with UEFA to “seek protection” from Europe’s governing body, which it joined in 2016 along with FIFA.

“The UEFA and FIFA criteria are crystal clear and Spain knows this, so everything being said and written does not change these rules.”

Kosovo unilaterally declared its independence from Serbia in 2008 and it is recognised as a sovereign state by 98 member states of the United Nations.

Spain’s minister for foreign affairs Arancha Gonzalez Laya acknowledged when the World Cup qualifying draw was made in December that the country did not recognise Kosovo as a state, adding the government would work alongside FIFA ahead of the match.