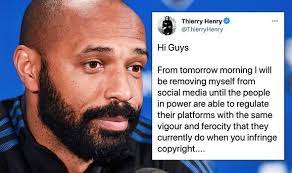 Henry, who recently stepped down as CF Montréal coach for family reasons, published a strongly worded statement on Twitter last Friday saying he would remove himself from social media by the following morning.

“The sheer volume of racism, bullying and resulting mental torture to individuals is too toxic to ignore,” said Henry who won the World Cup with France in 1998 and also played for Barcelona.

“There HAS to be some accountability. It is far too easy to create an account, use it to bully and harass without any consequence and still remain anonymous. Until this changes, I will be disabling my accounts across all social platforms. I’m hoping this happens soon.”

Abusers are able to hide behind anonymous profiles and Henry, who has 2.3 million followers on Twitter, told CNN: “It’s not a safe place and it’s not a safe environment.”

“I wanted to take a stand on saying that it is an important tool that unfortunately some people turn into a weapon because they can hide behind a fake account.”

“I’m not saying it’s not good to have social media, I’m just trying to say that it has to be a safe place. Basically, I did what I felt and I hope it can inspire people to do the same thing if they feel the same way.”