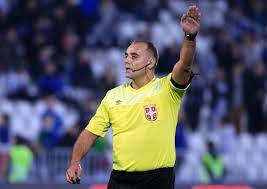 April 6 – A Serbian referee has been handed a 15-month prison sentence and banned from officiating in his country for 10 years after awarding two highly suspicious penalties, one of which was described as “scandalous” by the local media.

Srbjan Obradovic (pictured) pointed to the spot on two occasions in Spartak Subotica’s 2-0 win against Radnicki Nis in the Serbian league in 2018.

The game was a crucial match in the league’s play-off stage and the winner would clinch third position and qualification for the following season’s Europa League.

Police questioned the referee after the match because his decisions raised suspicion over possible match fixing.  Both penalties were awarded to Subotica and both converted.

Footage showed that the second penalty, with just 13 minutes left, was awarded for no apparent reason, with nobody appealing and no sign of a foul. The visitors had been reduced to ten men while the scores were still level at 0-0.

Almost three years on, the anti-corruption department of the Novi Sad Supreme Court came down hard on Obradovic.

Serbian football has been plagued with controversy in recent years. Last month, Slavisa Kokeza resigned as president of the Serbian football federation despite not being charged after police questioned him in relation to an investigation into organised crime.