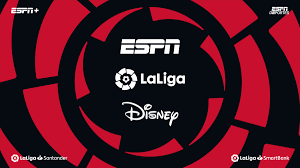 May 14 – LaLiga has signed an 8-year deal with the streaming arm of US sports broadcaster ESPN. The deal covers English and Spanish language rights.

The agreement, that starts with the new season in August, will see ESPN+ will stream live and on-demand replay coverage of all 380 LaLiga Santander matches per season. In addition, ESPN+ will livestream a selection of LaLiga SmartBank matches each round all season long, including five postseason promotion play-offs.

The deal with ESPN was achieved after LaLiga agreed (amicably) a buy-back of its North American broadcast from beIN Sport for an undisclosed sum. The original 4-year deal between beIN and LaLiga covered the period 2020-21 to 2023-24 and included exclusive English and Spanish language rights.

Both LaLiga and beIN were keen to emphasise the importance of their partnership in other international markets, including France in Europe; 11 countries in Asia Pacific, and the 24 countries of the Middle East & North Africa.

The buy-back deal for North American rights opens up a broader market opportunity for LaLiga in the US, while the deal gives beIN more resource to focus on its core US sports offering.

As well as the 380 live matches per season on ESPN+, the broadcaster will air selected matches across other networks each season, with coverage and highlights also available on SportsCenter and other ESPN studio programmes.

ESPN will air select matches matches across its networks each season, with coverage and highlights also available on SportsCenter and other ESPN studio programmes., as well as on ESPN digital and social platforms.

“This agreement will bring the excitement, passion, iconic clubs and global superstars of LaLiga to U.S. sports fans with unprecedented access and coverage,” said Burke Magnus, Executive Vice President, Programming & Original Content, ESPN. “As the sport of soccer continues its ascendance in the U.S. market, we are incredibly excited to work with LaLiga to establish a deeper connection to American fans through our company’s industry-leading streaming platforms, television networks, and digital and social media assets.”

LaLiga has aggressively targeted the US market, including having unsuccessfully attempted to take regular season league games to the US with its marketing partner Relevent Sports. The ESPN deal potentially marks a significant step forward.

“We are absolutely thrilled to bring LaLiga to ESPN in the U.S.,” said Javier Tebas, president, LaLiga. “This is an historic eight-season agreement in U.S. soccer broadcasting that speaks to the power of LaLiga and its clubs in the largest media market in the world and will bring the world’s best soccer league to American screens in a more comprehensive and modern way than ever before.”