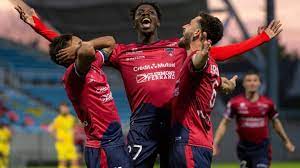 May 17 – Looking for a feelgood story amidst all the recent narrative of footballing greed and ego?

How about Clermont Foot 63 who have just been promoted to France’s top flight for the first time in their history – in their 30thanniversary season?

Clermont Foot have been powerful advocates of anti-discrimination and in 2014 made history by becoming the first club in  a major European football nation to appoint a female coach,  Corinne Diacre to manage the men’s first team.

She did the job for three years but that only tells part of the story for a team hardly known outside the country and whose rise to the top echelons of French football has been little short of remarkable, given they are in the same city as the far better known and longer established rugby club.

Created in 1990 following a merger between Stade-Clermontois and AS Montferrand,  Clermont Foot 63 rose through the minor leagues to reach the French second division where they have spent 14 consecutive seasons.

Last season, the club from Auvergne were heading for the playoffs when league football was halted in France and the standings frozen because of Covid-19.

But now they have made it to their Holy Grail – on a budget of just €11 million, only the 11th largest in the whole of the division.

After finishing runners-up to Troyes  under the leadership of coach Pascal Gatien, they can look forward to rubbing shoulders with the likes of Paris St Germain and Marseille.

“It’s been based on hard work and ambition but also no little humility. The emotion is huge.”