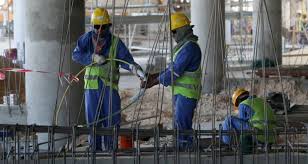 May 24 – The Nordic membership of FIFA has stepped up pressure on the world governing body to improve workers’ rights in Qatar, the 2022 World Cup hosts.

In a rare dissenting intervention at Congress, Finland’s FA president Ari Lahti said that “the current situation of migrant workers, no matter the improvement, needs to be improved…our beautiful game shall be the responsible game.”

Lahti was speaking on behalf of the Danish, Faroese, Icelandic, Norwegian and Swedish football associations as well. They have been among the most vocal addressing and protesting the human rights situation in Qatar after The Guardian earlier this year reported that 6,500 migrant workers have died in Qatar since the World Cup award.

“We care about human rights, about workers’ rights – not only our national associations but also our players fans and people,” said Lahti. “That is the way our societies are built up. We applaud the many leaps forwards for workers’ rights in Qatar since being awarded the hosting of the World Cup.”

But Lahti implored that more improvement is required and singled out housing, inadequate wages and a lack of access to courts as problematic.

“This is not just a problem for FIFA or Qatar or the Nordic FAs alone but is of utmost importance for the football community across the globe,” said the Finnish FA president. “Since 2016 our six FAs have formed a committee to improve human rights in Qatar. We have worked with external experts on these important issues. We embarked on visits to Qatar to study the housing, inadequate wages and lack of access to tribunals and courts.”

In March, World Cup qualifiers for next year’s global finals kicked off in Europe and Norway and Denmark were among the teams who protested against the conditions of workers in Qatar. Ever since the Gulf state won the hosting rights to the tournament in 2010, labour rights for migrants workers have been an issue of contention and controversy. Qatar points to reforms it has implemented and that it takes time to change but that there is a commitment to do so. Opponents argue that the current reforms don’t got far enough.

“We care for the workers in Qatar, we care for the football lovers looking to the FIFA World Cup 2022 as a beacon of joy and we want to take seriously our responsibilities in this respect and we care for the legacy left in Qatar when the final whistle has been blown,” concluded Lahti.