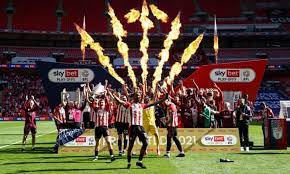 June 1 – After 74 years of trying, unheralded London club Brentford are back in the top flight of English football after beating Swansea City 2-0 in the high-stakes Championship playoff final at Wembley on Saturday, regarded as the single richest fixture in European football.

Brentford, whose recruitment policy is the envy of many bigger teams, sealed their first ever appearance in the Premier League a year after the heartbreak of losing at the same stage last season and finally erased the memories of nine playoff failures in their history.

Their victory will see them earn in the region of £175 million next season as they join automatically promoted Norwich and Watford in the Premier League. For the covid-interrupted 2020/21 season Premier League clubs each received a £135 million share of broadcast revenue.

The final whistle sparked jubilation for Danish manager Thomas Frank and his players and among the 5,000 Brentford fans whose club for years has lived in the shadows of the capital’s giants.

“I don’t know how to describe it,” said Frank. “ Last season I thought we deserved to go up but we didn’t. This group of players is incredible.”