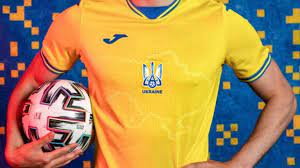 June 8 – Historical and bitter divisions between Ukraine and Russia over the embattled region of Crimea have spilled over into the upcoming Euros with the Russians furious over Ukraine’s national team shirt that featuresa map of the country which includes the disputed peninsula.

Amid widespread condemnation, Russia annexed Crimea in 2014, claiming it is their territory even though it is internationally recognised as part of Ukraine. Relations between Moscow and Kiev have deteriorated ever since.

Ukraine’s yellow shirt, unveiled days before the tournament kicks off this Friday, features the contours of Ukraine in white, including Crimea and the pro-Russian separatist-controlled regions of Donetsk and Luhansk. Politically charged slogans on the shirt read ‘Glory to Ukraine!’ and ‘Glory to the Heroes’.

Dmitry Svishchev, a Russian parliamentarian, was quoted as saying the design was “a political provocation”. He said showing a map of Ukraine “which includes a Russian territory is illegal. Sports arenas aren’t for political declarations.”

Russian foreign ministry spokesperson Maria Zakharova wrote on social media that the slogans on the shirts were nationalistic and that the slogans echoed a German Nazi rallying cry while another Russian lawmaker, former professional boxer Nikolai Valuev, condemned the Ukrainian uniform as an “unseemly attempt to politicise sports.”

“They can dream about what they want,” Valuev said, “but Crimea is part of the Russian Federation and it’s not up for discussion.”

But the Russians can do nothing whatsoever about the design, which has been officially approved by UEFA, and Ukraine of course took a different stance.

“I really like our team’s new uniform,” Ukrainian Foreign Minister Dmytro Kuleba wrote on Twitter. “I can tell those who are fussing because they can’t stand our internationally recognized borders or our official state greeting: We will not allow our national symbols to be insulted!”

Ukraine play their opening Euro 2020 match against the Netherlands on June 13 in Amsterdam, and also face Austria and North Macedonia in Group C. Russia take on Belgium in St Petersburg on June 12, and also face Denmark and Finland in Group B.

Andrii Pavelko, president of the Ukrainian soccer association who is also a UEFA executive committee member, fuelled the war of words by hailing the new kit as a symbol of the “single and undivided homeland.”

“This is the most valuable outline of our country for all of us,” Pavelko wrote.

“A single and indivisible homeland with the Crimea, Donetsk, Luhansk, Kiev, my native Dnipro, Lviv, Odessa and all cities and villages, where the main melody from childhood is the melody of the national anthem.”