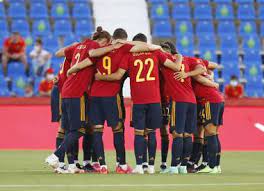 June 10 – On the eve of Euro 2020, Spain has belatedly decided to vaccinate the national team following positive coronavirus tests of both team captain Sergio Busquets and Diego Llorente this week.

On Wednesday, the country’s health minister approved a request to vaccinate the Spanish players. The last-minute decision will see the army administer Pfizer doses to the squad and their support staff. The protection of a first dose however will not kick in until after a few weeks and immediate side effects cannot be ruled out.

In Spain, the vaccine rollout is progressing according to age, from oldest to youngest. At present, the 40-to-49 age group is being vaccinated, but the positive tests of Busquets and Llorente prompted a debate as to whether the players should have been vaccinated earlier.

Protocols dictate that Spain train in small groups or individually for a further three or four days. The Spanish are due to open their Euro 2020 campaign on Monday against Sweden in Seville. On Monday, the Swedish announced that two of their players – Dejan Kulusevski and Mattias Svanberg – had tested positive.

The four cases in Group E led Danish coach Kasper Hjulmand to criticise UEFA over the way the governing body has handled vaccination for Euro 2020 participants. The Danish feature in Group B alongside Belgium, Finland and Russia.

“Most (European) countries have vaccinated risk groups. Nobody wants a vaccine that goes to someone who needs it most, but we are not in that situation,” said Hjulmand at a news conference. “I was hoping we would have done the same as the IOC.”

“I am worried that it will get worse, I am worried about the Swedes and the Spaniards if infections continue to occur. It would be a shame. We want a European Championship where the best are under the best conditions. The best players have to play for their national teams.”

France, Belgium and Italy were among the teams who vaccinated their players ahead of the finals, but the tournament has proven to be a nightmare for UEFA to organise, even a year on from when the pandemic began. The 24-team pan-European tournament has one fewer host city with Dublin dropping out and stadium capacities have been reduced. Teams are subjected to life in a bubble and strict coronavirus protocols. Players who test positive will have to isolate.