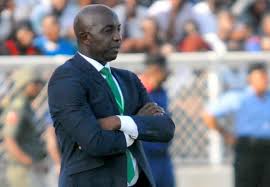 June 22 – Former Nigeria coach Samson Siasia’s life ban for bribery related to match-fixing has been reduced to five years by the Court of Arbitration for Sport (Cas) which argued he did not profit from his misdemeanor.

The court ruled that the ban, imposed by FIFA in April 2019 after Siasia was found guilty of agreeing to join a match-fixing ring masterminded by notorious Singaporean Wilson Perumal nine years earlier, was “disproportionate”.

Siasia (pictured) was caught after a wider investigation involving Perumal, who confessed to international match-fixing. He was initially banned for agreeing to “receive bribes in relation to the manipulation of matches.”

And, it added, the FIFA fine was “inappropriate and excessive” because Siasia had not profited and would not be able to earn money from the sport. His ban expires in August 2024.