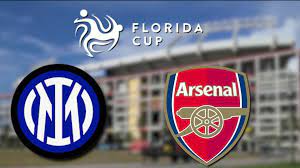 July 22 – Inter Milan have joined Arsenal in withdrawing from the upcoming Florida Cup because of the Covid-19 pandemic. Arsenal cancelled the pre-season trip after a “small number” of their touring party tested positive for Covid-19.

Inter subsequently also pulled out because of the “risks” of international travel in spreading the virus.

Both sides were scheduled to play in the event along with Everton and Colombia’s Millonarios.

Organisers said Sunday’s match at between the two remaining sides at Camping World Stadium, Orlando, will still go ahead and “additional updates to the tournament schedule will be announced shortly”.

Inter said their decision was “in consideration of the risks that, at present, international travel involves as a result of the evolution of the spread of the pandemic, risks that have already caused the withdrawal of Arsenal”.

Organisers said they “regret” Inter’s decision to withdraw and will refund fans who purchased tickets for the original line-up.