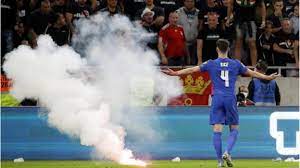 “It is completely unacceptable that England players were racially abused in Hungary last night,” Johnson said on Twitter, urging FIFA to take “strong action against those responsible to ensure that this kind of disgraceful behaviour is eradicated from the game for good.”

Monkey chants were aimed at England forward Raheem Sterling and teenage substitute Jude Bellingham while England players were jeered for taking a knee and pelted with plastic cups during their 4-0 win in Budapest – their first game since losing the European Championship final.

The English FA said it, too, was “asking FIFA to investigate the matter.”

Hungary was playing in front of a capacity 60,000 crowd even though UEFA ordered the team to play three games behind closed doors – one of which was suspended for a probationary period of two years – as a punishment for racist and homophobic abuse by their supporters at all three ‘home’ Euro 2020 group games during the summer.

But those games have to be in UEFA competitions whereas World Cup qualifiers are organised by FIFA.

In a statement FIFA said:  “First and foremost, FIFA strongly rejects any form of racism and violence and has a very clear zero-tolerance stance for such behaviour in football.

“FIFA will take adequate actions as soon as it receives match reports concerning yesterday’s Hungary-England game. With regards to the previous UEFA sanction against Hungary, please note that as specified by UEFA at the time, this sanction is to be served in UEFA competitions.”

European football’s leading anti-discrimination official did not mince his words.

“This match should have been played behind closed doors,” Piara Powar, executive director of the FARE network, told The Associated Press. “It does not make sense that a set of supporters sanctioned for discrimination in the European Championships are then free to racially abuse members of the next team they play because it’s a World Cup qualifier.

“That is not a punitive sanction designed to deal with a chronic problem such as racism or homophobia. It is a pretense.”

“Although some people are stuck in their way of thinking and prejudices, they are going to be the dinosaurs in the end because the world is modernizing,” Southgate said. “Hungary isn’t anywhere near as diverse in their population as our country is, it is still taking us a long, long time to get to where we need to get to and inevitably, if other countries don’t have that same level of diversity, it is probably not in their thinking in the same way as in our country.”

But before the game, Southgate was more circumspect when addressing Hungary’s racism record.

“I never like it when we look outside when we’ve not got our own house in order,” he said, referring to the appalling behaviour of ticket-less fans who stormed Wembley at the Euro 2020 final in July – and to his players suffering racist abuse in their own country.