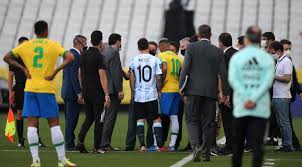 Aston Villa’s Emiliano Martínez and Emi Buendía and Tottenham’s Cristian Romero and Giovani Lo Celso may face charges of misrepresentation after allegations that they submitted false information to local authorities about their whereabouts before entering Brazilian soil.

“We can confirm an investigation has begun into the possible crime of supplying false information,” a police spokesperson said. “Yesterday, the players were notified they must leave the country, which is the regular procedure, and statements from them were taken.”

Anvisa, Brazil’s health surveillance agency, said in a statement that the players in question “provided false information and failed to comply” with the rule that foreign travellers who have passed through UK, South Africa and India in the previous 14 days are prevented from entering the country or need to self-isolate.

The match had been given the go-ahead by Conmebol, the Brazilian FA (CBF) and Brazil’s federal government, meaning that a mandatory 14-day quarantine didn’t apply to players coming from the United Kingdom.

But three hours before kick-off Anvisa issued the decision that those four Premier League players in the Argentinean delegation should be deported. That decision was reportedly ignored by the Argentine FA (AFA) with the backing of the CBF.

Anvisa said it held a meeting with Argentina’s coaching staff and Conmebol on Saturday.  The match was abandoned when Anvisa agents entered the field to detain the four players.

In a statement, FIFA said: “FIFA regrets the scenes preceding the suspension of the match between Brazil and Argentina for the CONMEBOL qualifiers of World Cup 2022 which prevented millions of fans from enjoying a match between two of the most important football nations in the world.

“The first match official reports have been sent to FIFA. This information will be analysed by the competent disciplinary bodies and a decision will be taken in due course.”