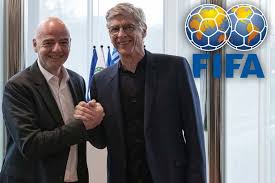 September 8 – If you think you might need moral support then call up a group of your sycophantic and often well-paid ‘legends’ to get you over the trickier hurdles of public and industry opinion.

That would appear to be what FIFA has done with its Technical Advisory Group looking into the impact of a World Cup every two years in the men’s game.

Led by FIFA Chief of Global Football Development Arsène Wenger, a group of good old boys (they are all boys as this is the men’s game after all) have been convened in Doha, Qatar, as part of the global consultation process on the international calendar – and more specifically on moving the World Cup to a two-yearly schedule.

FIFA said that the group will provide “direct insight and experiences from professional footballers and coaches from across the spectrum of the international game with an aggregate of over 3,000 international appearances and more than 300 FIFA World Cup matches between them”.

Under discussion are “potential alternatives to the current organisation of the men’s game with an emphasis on making football truly global and giving every talent and every region a chance,” said FIFA in a press release. But if FIFA is already the world’s game and played in every country on earth and even in some countries not recognised by FIFA, a good starting point might be a definition of what they mean by ‘truly global’.

The cast list of those gathered is undoubtedly an impressive roll call of players and coaches who have lived and thrived in FIFA’s rarefied elite atmosphere, some of them are even still active in the game, though for most of them personality driven and media appearances would trump hands-on football involvement at this point in their careers.

But opinion is opinion, and FIFA president Gianni Infantino’s ‘Arsene Plan’ needs some outside support to enable FIFA’s wider membership to vote more comfortably for their wallets. Cynical? Perhaps, tomorrow’s press conference on the outcome of the debate might be more informative.