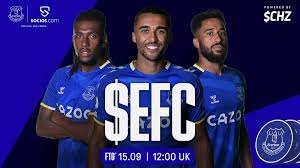 September 15 – Everton sold out 500,000 fan tokens in their first offering on the Socios.com platform in just four minutes this morning.

Issued at £2 each, more than 10,000 supporters and collectors from around the world bought in to the  $EFC Fan Token Offering (FTO).

The club said that there will be further issues of fan tokens.

Everton said that the first poll for token holders to get engaged with the club will be announced tomorrow. Token holders also have the opportunity to enter and take part in exclusive money-can’t-buy fan experiences and get to see matchday behind-the-scenes at Goodison Park.