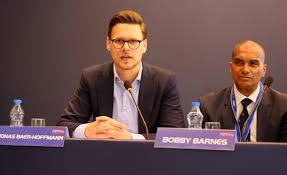 September 15 – Players’ union FIFPRO has again said that any change to the international match calendar – and principally the introduction of a biennial World Cup – must put players and their workload at the centre of any decision-making.

FIFPRO says that proposals to expand the number of World Cups alongside the other competition reforms being discussed “are inadequate in the absence of solutions for existing problems. Without the agreement of the players, who bring all competitions to life on the pitch, no such reforms will have the required legitimacy.”

In particular FIFPRO says the current debate is a “flawed process” and that public debate “in the absence of in-depth impact assessments” and “transparent information” is not the way to get an agreement between all stakeholders.

FIFPRO General Secretary, Jonas Baer-Hoffmann (pictured left), said: “The lack of genuine dialogue and trust between institutions in football blocks the game’s ability to build more resilience after a painful pandemic, but rather we keep reverting to the same old habits of conflict.”

“Players have natural physiological limits and an inherent interest in the sustainable advancement of the game: the success of the sport depends on their physical and mental well-being. What we decide at the peak of the game impacts thousands of professionals around the world. Any plans to expand competitions must integrate their collective experience and views. It is also once more frustrating that the specific and fundamental impact on the women’s game is debated as a side-product rather than its own legitimate process with unique needs and opportunities.”

FIFPRO outlined a set of criteria by which it will examine the proposals which include the following:

FIFPRO said it would meet FIFA regarding the proposals in the “near future”.