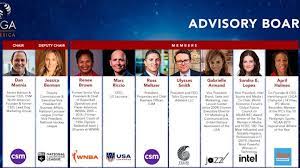 September 16 – With SIGA’s Sports Integrity Week in full swing with over 100 speakers and more than 1,500 participants, it North American offshoot, SIGA AMERICA, has announced its high-level senior Advisory Board.

SIGA has been expanding its global footprint and in the US in particular where SIGA America has been established as a non-for-profit organisation.

It has as its three strategic priorities are Good Governance in Sport (including race, gender, diversity and inclusion); Sport Betting Integrity; and Youth Development and Protection in Sport.

Commenting on his appointment, as chair, Dan Mannix, Senior Advisor, and former CEO of CSM North America, said:”SIGA is an organisation whose time has come! Having worked in sports marketing and the wider sports industry, I know all too well the need to protect the integrity of the game. It is vital! Integrity is core for sport and its ecosystem including those that invest in it.

“Sport in America is facing several pressing challenges. At the Advisory Board, we #StandWithSIGA to deliver its vision and mission of a sport played and governed under the highest integrity standards. We call on the US sports industry to join our global movement.”

SIGA is tailoring its approach to integrity issues with different continental approaches. SIGA America is an example of that local outreach and that sports integrity issues globally fall under common banners they frequently have specific local and cultural challenges.

Commenting the launch of the Advisory Board, Emanuel Macedo de Medeiros, Chairman & CEO of SIGA AMERICA and Global CEO of SIGA, welcome the new Advisory board, saying: “They hold an unrivalled wealth of knowledge and expertise and an impressive track record from a wide range of sectors, combined with genuine passion for Sport and belief in SIGA’s vision and reform agenda. I look forward to working with them as we remain resolutely focused on delivering our mission to help the American sport movement and the wider industry to meet the increasingly complex challenges ahead.”

The SIGA AMERICA Advisory Board is composed of: