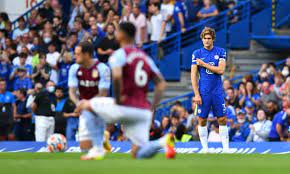 September 21 – Marcos Alonso is no longer taking the knee because he believes the gesture is “losing a bit of strength”.  Instead, the Chelsea player has opted to point at the anti-racism message on the sleeve of his shirt.

After Chelsea’s 3-0 win at Tottenham on Sunday, the wing-back was asked to explain his rationale to no longer take the knee, a gesture that has become a fixture at Premier League matches before kick-off after the Black Lives Matter movement erupted in the United States.

“I am fully against racism and I’m against every type of discrimination. I just prefer to put my finger to the badge where it says: ‘No to racism’, like they do in some other sports and football in other countries. I prefer to do it this way and, of course, to say very clearly that I am against racism and I respect everybody.

Alonso’s team-mates Reece James, Antonio Rudiger, N’Golo Kante and Romelu Lukaku have all suffered racist abuse in recent years, but the Spaniard says he has not spoken to them about changing his stance.

”No, we haven’t talked about it,” said Alonso. “We are in the changing room and we are like a family. I have a very good relationship with everyone, I love everyone and up to now we haven’t talked about it. I don’t think there is a need to, but, of course, if I have to speak to anyone, I will say the same thing I just told you and I don’t think there will be any problems.”

With his words he echoes the views of Crystal Palace winger Wilfried Zaha, who stopped taking the knee in March because he felt it was “degrading”. Zaha has argued that the action has become more of a ritual, its meaning increasingly lost.

Taking the knee has not always been welcomed in England with some fans booing the gesture, including at Wembley before England matches at Euro 2020.