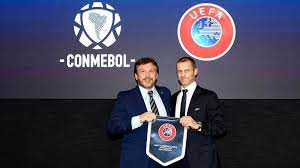 September 29 – The geo-politics of world football have taken another significant twist with an agreement by UEFA and Conmebol to stage a showpiece inter-continental fixture between their respective champions next summer that could end up becoming an established part of the calendar – seemingly without the official approval of FIFA.

Euro 2020 winner Italy will play Copa America titlist Argentina next summer as part of a move to build closer ties between the two bodies amid an increasing war of words with FIFA over the future of the game and the international match calendar.

“The agreement reached by the two organisations currently covers three editions of this match between the respective continental winners,” UEFA said in a statement.

“The organising of this match is part of the expansion of the cooperation between UEFA and CONMEBOL, which notably includes women’s football, futsal and youth categories, the exchange of referees, as well as technical training schemes,” UEFA said.

No venue or competition name has yet been decided but a source told Reuters the annual fixture has been given the working title of the ‘Finalissima’. Some reports said Naples has been suggested as a possible venue.

What we do know is that the first match is planned for “during the international window in June 2022.”

The move comes after both UEFA and Conmebol stated their opposition to FIFA’s controversial plans for a biennial World Cup. Every World Cup since the first edition in 1930 has been won by a European or South American nation and both bodies favour preserving the status quo.

Interestingly there is no mention whatsoever of FIFA in the UEFA statement, another indication of the growing rift between the two organisations and their respective presidents.

As part of the co-operation agreement, UEFA announced they were setting up a joint office with Conmebol in London, which will be in charge of coordinating “projects of common interest” – another potential snub to world football’s governing body.