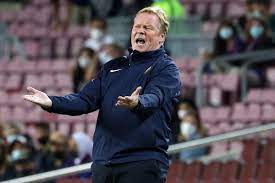 September 30 – Pressure is building on Barcelona manager Ronald Koeman after the club made their worst start to a Champions League campaign ever following a humbling 3-0 defeat at Benfica.

Koeman said there was “no point” comparing his team to those from the past but that won’t pacify the diehards who also saw Barca beaten by the same score by Bayern Munich earlier this month.

It’s the first time debt-ridden Barca have lost their opening two matches in the competition as they sit bottom of Group E.

Koeman is in charge of Barca during one of their toughest crises in recent history. The club’s financial struggles were starkly illustrated by having to lose Lionel Messi to Paris St-Germain.

The five-time winners now face the prospect of failing to reach the Champions League knockout stage for the first time since the 2003-04 season, when they did not even qualify for competition.

“I’m not going to argue about the level of my team,” said Koeman, part of the Barca side that won the European Cup in 1992.

“There’s no point in comparing this with Barcelona teams of years gone by. That’s as clear as water. I can only give you my opinion of my work at the club – I feel backed by my players and their attitude.”