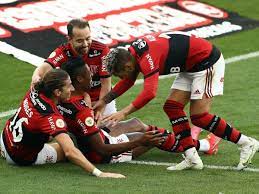 September 30 – Flamengo and Bruno Henrique once again breezed past Ecuador’s Barcelona 2-0 to complete a 4-0 semi-final victory and set up a blockbuster Copa Libertadores final against Palmeiras, the second all-Brazilian final in a row.

The Rio giants took a handsome 2-0 lead to Guayaguil thanks to a Bruno Henrique brace and Flamengo’s number 27 repeated his trick, scoring either side of the half, to ensure Flamengo’s presence in the final.

“Today, Flamengo proved its strength,” said coach Renato Gaucho at a news conference. “We faced an opponent who had not lost at home, were difficult to beat, and that gave us work at Maracanã and here. The team did well in every respect. Tactically, physically, mentally and focused on progressing.”

Flamengo won the competition in 2019 and last year Palmeiras triumphed against Santos to lift South America’s most coveted club prize. Palmeiras will have a chance to become the first club in two decades to retain the South American crown after winning their all-Brazilian semi-final against Atletico Mineiro from Belo Horizonte thanks to the away goals rule. The first leg had ended goalless, but Eduardo Rodrigues’ goal would prove decisive in a 1-1 draw in the second leg.

Montevideo, Uruguay, and the Estadio Centenario will host the final on November 27. Both the final of the Copa Sudamericana, South America’s equivalent of the Europa League, and the women’s Copa Libertadores will be staged at the same venue a week earlier.