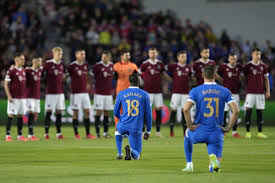 October 1 – Scottish champions Rangers have written to UEFA to complain about the racist treatment of Glen Kamara during their Europa League game at against Sparta Prague on Thursday.

Kamara was targeted repeatedly during his first visit to Prague since Ondrej Kudela was banned for ten games for racially abusing the Finn when Rangers played Sparta’s city rivals Slavia last season.

The ban from all UEFA competitions prevented Kudela, a regular starter for the Czech Republic, from playing at this year’s European Championship.

Sparta were supposed to be serving a stadium ban after their fans racially abused Monaco striker Aurelien Tchouameni last month but UEFA for some reason relented in order to allow thousands of school children and their chaperones to watch the game.

The move seriously backfired as Kamara’s every touch was jeered, all the more so when he received a red card after 74 minutes for picking up a second yellow.

“There needs to be more done,” said Rangers manager Steven Gerrard. “Not just myself, everyone across the world is asking for bigger and more extreme punishments in terms of racism. It needs to be eradicated.

“But until the powers that be do more and treat it more seriously, we’re going to be dealing with these questions for a long time.”