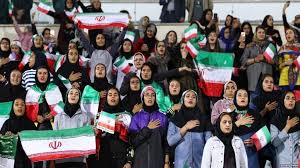 October 5 – After a two-year ban, Iranian women will be allowed to return to the stadium on October 12 and support Team Melli in the World Cup qualifier against South Korea.

Women have traditionally been banned from attending sports event in the conservative state, but in recent years there have been minor concessions from local authorities in allowing female fans access, with 3,500 women allowed to watch Iran’s 14-0 hammering of Cambodia in October 2019.

All fans were however banned from stadiums because of the coronavirus crisis, but fans, including women, will be allowed to return for the qualifier against South Korea.

“The presence of women has been authorised for the match between the national football teams of Iran and South Korea” at the capital’s Azadi stadium on October 12, the state television-linked Young Journalists Club said.

Women have in general been banned from watching football in the country since the 1979 Islamic revolution. Local authorities deem the atmosphere at football matches too masculine for women to attend the games.

In 2018, women were allowed to attend a friendly against Bolivia, but that same year Iran detained multiple women who tried to get into the Tehran derby between Esteghal and Persepolis. FIFA president Gianni Infantino, who attended the match, later said: “I went to the President of Iran and I asked him: ‘Please, do consider to give access to woman in the stadium.’ He promised me that this will be made.”