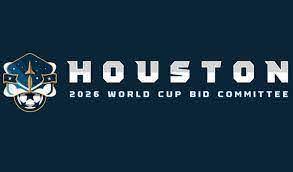 October 7 – World Cup 2026 bid city Houston kept their focus on the hosting prize with the launch the ‘Spirit of Houston’ campaign yesterday marking the start of the campaign with a social ‘roadblock’ that saw organisations and indivduals share the campaign launch video.

The ‘Spirit of Houston’ campaign “is aimed at showcasing that the weight of the entire community is passionately rallying together to deliver future-focused initiatives in support of the city’s bid to host the most popular sporting event in the world”, said a Houston 2026 press release.

To date Houston has initiated a number of programmes around its hosting bid, including:

Grow the Game initiative: a partnership with the U.S. Soccer Foundation to build 30 mini-pitches;

Art of Soccer campaign: raised nearly $500,000 from more than 50 local businesses, which purchased and painted oversized ceramic soccer balls for display around the city;

Gateway to the World mural: seven local artists painted a 10,000-square-foot mural at one of Houston’s two international airports;

Human Rights Committee: created a committee to oversee issues and opportunities around human rights around the World Cup, holding a series of workshops where input and ideas were conveyed from nearly 100 local human rights stakeholders;

Sustainability Committee: worked with many of Houston’s leading energy companies to develop concepts for sustainability and carbon reduction in 2026.

Houston 2026 President Chris Canetti said: “Houston is not only a great city with a proud history of hosting major sporting events and has full operational capabilities for the FIFA World Cup, we are a city with spirit. Through our deliberate actions, that spirit is already shining through, highlighting our region’s collective enthusiasm, commitment and investment in serving as a host city in 2026.”