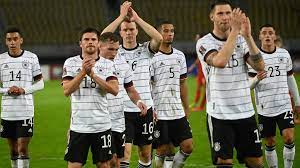 October 12 – Germany became the first team to qualify for the 2022 World Cup after breezing past North Macedonia 4-0 on Monday to claim top spot in Group J with two games to spare.

The North Macedonians, who debuted in a major finals at Euro 2020, held firm in the first half, but goals from Timo Werner, a brace, Kai Havertz and Jamal Musiala led Germany to a comfortable victory, ensuring a fifth win out of five for new coach Hansi Flick and a ticket for next year’s global finals in Qatar.

The win took Germany, top of Group J, to 21 points. Second-placed Romania, on 13 points, will battle for a playoff spot with North Macedonia and Armenia, who both have 12 points.

“From the result it was perfect. We got what we wanted, qualified as quickly as possible and we now have five wins in a row,” said Flick, who succeeded Joachim Loew earlier this year.

“Again the attitude was right. Compliments to the team. They did not ease off. The first half was a bit wild and we lacked a bit of precision. But we kept at it. We can be satisfied.”

Under Loew, Germany suffered a defeat at the hands of North Macedonia at home last March, just months after a historic 6-0 loss to Spain and just months before Euro 2020. The European championship marked the end of the Loew era, but there was to be no last hooray for him as Die Mannschaft underwhelmed in the group stage before exiting the tournament in the round of 16 against England.

Flick stepped in to replace Loew and under the former Bayern Munich coach, Germany has found a measure of stability. Even so, Germany often lacked the incisiveness to dismantle their opponents in the first half.

“It was difficult at the start but it was good we did not concede a goal,” said Werner. “We know that if we push and attack over 90 minutes then it is only a matter of time until we score.  After the lead, it was easier for us.”

Next year, Germany will not be considered among the top favourites in Qatar. As defending champions, the Germans crashed out of the 2018 finals in the first round. Flick will have time to improve his team, but other European powerhouses seem in better shape to launch a title challenge.

On Tuesday, Denmark can become the second nation to punch a World Cup ticket if they beat Austria in Group F. As hosts, Qatar qualify automatically for the World Cup.