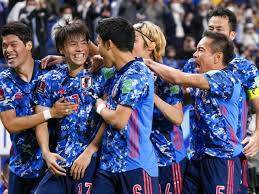 The Japanese were in danger of missing out on the global finals for the first time since 1998 following a defeat in Saudi Arabia last week, but they came good in a crunch qualifier against the Socceroos to get their campaign back on track.

In Saitama, head coach Hajime Moriyasu, whose job was on the line, shook up his starting eleven with the introduction of Junya Ito, Hidemasa Morita and Ao Tanaka. His choices proved to be inspired. The hosts got off to a flying start when Tanaka, wide-open inside the box, delivered a cool finish to open the score in the 8th minute.

In the 70th minute, the visitors equalised through Ajdin Hrustic before an own goal from Aziz Behich five minutes from time handed Japan a crucial win that lifts them to six points, three behind second-placed Australia and six behind group leaders Saudi Arabia, who maintain a perfect record after four matches.

“We’ve had a lot of tough games where we couldn’t get the result we wanted, but the players are working hard before every game to reach the World Cup and they put out everything they had to get today’s result,” said Moriyasu.

With the victory, Japan ended Australia’s 11-match unbeaten run. The Socceroos have never won away to Japan. “The win record’s over, but we still hold that record and it’s a fantastic achievement by the players,” said Australia coach Graham Arnold. “We can stop talking about that now and we can move forward now with the World Cup campaign.”

In November, Japan will take on both Vietnam, bottom of the group, and Oman away.