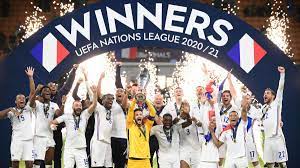 October 19 – UEFA is reporting that its just completed Nations League final tournament in Italy delivered a 30% growth in TV audience figures from the inaugural edition in 2019, helo in Portugal.

The finals saw four games that on the pitch were all decided by a single goal – France beat Spain in the final – and werewatched in more than 200 countries and territories, with over 80 broadcasters.

There was an estimated cumulative live audience of 130 million, and an estimated reach in excess of 200 million.

On digital platforms, UEFA said there were more than 230 million global social interactions. On UEFA’s own social media platforms, 353 million impressions (an increase of 28% from the previous edition) were recorded during the week of the finals, while cross-platform engagements more than doubled from 9.4 million to 19.2 million and video views hit 78 million from 28 million.

In the four competing nations of Belgium, France, Italy and Spain, a total audience of 62.9 million watched live.

“These excellent television audience and social media figures show there is significant interest in the UEFA Nations League from football fans in Europe and beyond. The tournament is a huge asset for European football and has demonstrated it delivers world-class matches for live and TV audiences alike,” said UEFA marketing director, Guy-Laurent Epstein.

“The UEFA Nations League was designed to create competitive matches at every level of national-team football and, judging by the interest, especially in the four countries who participated in the final tournament, it has done just that.”