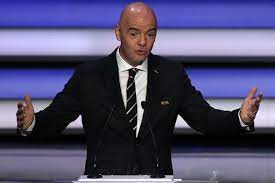 October 20 – Is the biennial World Cup dead and buried? After months of relentless PR and intense lobbying, a downbeat Gianni Infantino pivoted away from his brash crusade to railroad through his World Cup plans and overhaul the international match calendar following FIFA’s council meeting, held today at the world governing body’s headquarters in Zurich.

Infantino struck a more conciliatory tone, suggesting further consultation and a need for consensus, and settling on a plan for a global summit instead of an extraordinary congress and vote on the proposals in December.

At a news conference on Wednesday, Infantino spoke with the laboured cadence of a man who has been defeated but does not want to admit it.  Once again, he presented the global governing body as a reformed organisation, praising the democratic values of FIFA and open debate over FIFA’s biennial revolution, but the more the FIFA supremo spoke of the many values his organisation underpins, the more apparent it was that Infantino’s proposal, marketed by Arsene Wenger, had fallen flat after staunch opposition from both UEFA and Conmebol.

As a result, FIFA will not hold stage an extraordinary congress of all its members in December to vote on the biennial World Cup proposal but instead, Infantino will have to settle for a global talk shop with further discussions on the agenda.

Infantino said he was encouraged “by the healthy debate” about the biennial World Cup and international match calendar and claimed that this was all a part of democratic debate that was a consequence of the FIFA clean-up. But the FIFA boss did little to hard-sell the idea that has consumed football and its stakeholders for months, perhaps he knew better than to push at this juncture.

“We have to see how we can approach the different opinions of different parties. We need to look at sporting and economic merits, then we can have a reasoned discussion about World Cups and perhaps other competitions. I do not know what the outcome will be,” said Infantino.

It was an uncharacteristically diplomatic tone from Infantino, who claimed said that “FIFA is not used to democratic processes”, a statement of which the irony won’t have been lost on both UEFA and the International Olympic Committee, who had demanded a more open and transparent forum to discuss the international match calendar.  Infantino added: “It is not about FIFA or the World Cup – this is about our children.” The IOC would almost certainly argue the same.

And so, surprisingly, after months of forcing the idea of biennial World Cup on football, Infantino introduced a new word, ‘consensus’, that became a recurring theme of his press talk, stressing he hoped to find common ground and, perhaps, at last, heeding UEFA’s warning over a potential boycott.

UEFA boss Aleksander Ceferin previously warned of “terrible consequences for football in general”. Indeed, there had been dangerously few supporters of the biennial proposal.

A mild Infantino said FIFA would go ahead with the plans “if everyone is better off” before again reaching for that “global consensus” mantra.  The FIFA boss stressed his role as a facilitator, acknowledging his organisation had “received some legitimate criticism” and that “everyone has the right to oppose” the plans.

Infantino however offered little detail on how he will forge a consensus in such a hostile climate and with such a divided membership base, and increasingly within his own faithful supporters.

“Everyone has taken note of the position of UEFA and there are other stakeholders who say ‘only this or nothing else’. We need to finalise our feasibility study – and then we can have a rational discussion and not an emotional one,” said Infantino.

In short, FIFA’s executive now needs to find a concrete case for its biennial World Cup obsession (note, it is a biennial World Cups for men and women, so effectively a World Cup every year) if it is to convince its members. Rolling out legends and few active (and a few more inactive) coaches in stage-managed press settings isn’t enough to railroad through such a seismic change to the world football calendar – the kind of change that would be hard to reverse if it went horribly wrong.

Infantino concluded that he didn’t know what the future would look like.