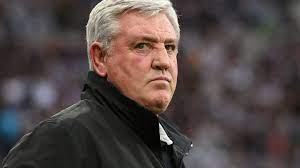 October 21 – After two seasons in charge of his hometown club, Steve Bruce has exited Newcastle United after the club’s new owners confirmed his departure by mutual consent.

On Sunday, Bruce took charge of his 1,000th competitive game as a manager during a 3-2 defeat at home to Tottenham, but following the Saudi Arabia-backed Public Investment Fund (PIF) £305 million takeover of the club this month it was only a matter of time before Bruce was shown the door.

Bruce said the role at Newcastle and the fan-criticism has taken its toll on him. “I think this might be my last job,” said the former Aston Villa, Hull City and Sunderland boss. “It’s not just about me; it’s taken its toll on my whole family because they are all Geordies and I can’t ignore that. They have been worried about me…”

Sitting second from bottom, Newcastle have garnered just three points from eight matches in the current Premier League campaign. First-team coach Graeme Jones will take charge of the team on an interim basis against Crystal Palace this weekend.

“By the time I got to Newcastle, I thought I could handle everything thrown at me, but it has been very, very tough,” reflected Bruce. “To never really be wanted, to feel that people wanted me to fail, to read people constantly saying I would fail, that I was useless, a fat waste of space, a stupid, tactically inept cabbage head or whatever. And it was from day one.”

“I’ve always enjoyed the fight, proving people wrong, but that’s all it ever seemed to be. A fight, a battle. It does take its toll because even when you win a game, you don’t feel like you are winning over the supporters.”

Former Chelsea manager Lampard, ex-Roma coach Fonseca and Belgium’s coach Roberto Martinez have been cited as candidates to succeed Bruce. Lucien Favre and Eddie How are reportedly also in the frame.