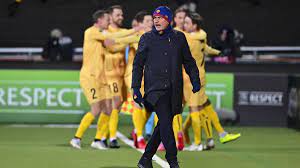 October 22 – Jose Mourinho is in the headlines again. On Thursday, the Portuguese coach suffered the biggest defeat of his career with AS Roma at the hands of Norway’s Bodo/Glimt, but Mourinho blamed his players for the 6-1 result.

In the Conference League, UEFA’s new club competition which ranks as the third tier in European club football, Bodo ran riot with a four-goal blitz in the second half to win the encounter 6-1 and inflict a historic defeat on the Italian club.

Mourinho rotated his team for the match after Roma’s Serie A 1-0 loss against Juventus at the weekend. They host Napoli later this week. The Portuguese claimed responsibility for the defeat but then went on to blame his players.

“The responsibility is mine,” he said. ‘I lined up players who played less, I decided to make these changes and rest many players. I did it with good intentions, to give an opportunity to those who work hard and to rotate the squad on a synthetic pitch in cold weather.”

In a jab at Mourinho, Norwegian newspaper Verdens Gang called Bodo/Glimt the ‘Special Ones’.