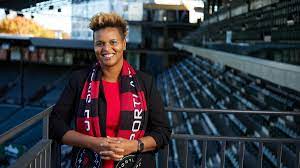 On Monday, the Portland-based outfit unveiled LeBlanc, 41, as the new manager of football operations. She will report to owner and CEO Merritt Paulson.

“The global soccer network she has fostered during her career has perfectly positioned her to lead the Thorns, and it is hard to think of anyone with a more innate leadership ability and unique blend of skills than Karina,” said Paulson.

“She will make an impact in the Portland community and help push the NWSL forward, as well as strengthen our influence and standard in the international game. Lastly, I am grateful to Victor Montagliani and Concacaf for fully supporting Karina in making this change.”

At Concacaf, LeBlanc headed the women’s football department, developing the game across the vast and diverse region. In 2019, she launched the Concacaf W strategy for women’s football which in August received a major boost with Concacaf announcing a whole slew of new women’s competitions and initiatives.

With her new role in Portland, LeBlanc returns to one of the clubs she featured for during her two-decade playing career. In 2014, she departed Thorns for the Chicago Red Stars. From 1998 to 2015, LeBlanc, a goalkeeper, played 110 times for Canada.